At Go North East’s depot in Sunderland, the company is positioning its buses in the shape of a heart in a tribute to the great work that’s going on across the country.

The on-site workforce are set to clap, with drivers tooting their horns and flashing their lights, to show appreciation for key workers, including NHS heroes and retail staff, as well as their own colleagues who are doing a fantastic job of helping keep the region moving.

There are also similar activities taking place at Hexham General Hospital with a Go North East bus full of rainbow posters attending, as well as celebrations at the company’s Consett depot and further activity at Gateshead Interchange.

This adds to last week, where Go North East joined NHS staff at Newcastle Freeman Hospital with a double-decker bus, which had windows fully kitted out with rainbow posters, all drawn by family members of Go North East’s key workers.

The company attended the hospital along with Northumbria Police, Tyne and Wear Fire and Rescue, Arriva North East and Stagecoach North East.

Go North East's team has also raised over £1,600 in support of local hospitals and the NHS. Will Sewell, an operations manager at the company’s depot in Sunderland, came up with the hair-raising scheme and, along with fellow operations manager Jeff Hodgson, they have both committed to shaving their heads tonight now the initial target has been reached.

Martijn Gilbert, managing director at Go North East, said: “It’s great to see the region pull together in the most challenging of times for initiatives like this.

“Not only do they recognise the heroes we have working across the region and the rest of the country, but they really do put smiles on people’s faces too and we’re so proud to be involved.”

To find out more about Go North East and to view emergency timetables for key workers and essential journeys, visit www.gonortheast.co.uk/coronavirus. 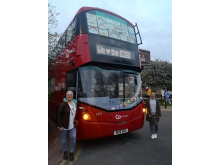 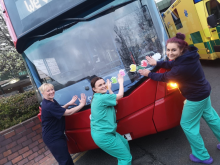 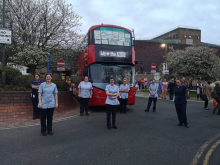 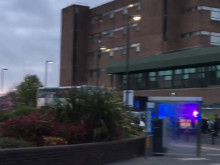