After two and a half years of development, the region’s largest bus operator, Go North East opened the doors to its brand new £3.5 million, state-of-the-art Consett depot in County Durham on Friday.

In an official opening of the multi-million-pound facility, Go-Ahead Group Chief Executive David Brown was joined by Cllr Simon Henig, leader of Durham County Council and Go North East Managing Director, Martijn Gilbert. Also in attendance were members of the Go North East team, its stakeholders, suppliers and partners to declare the site – which has sustainability at its heart – open.

David Brown, Group Chief Executive of Go-Ahead Group, said: “This new depot is further demonstration of our long-term commitment to the North East, where we are the third largest private employer. Bus services are vital for providing our communities with affordable and reliable access to employment, education and leisure. With 60% of all public transport journeys taking place on the bus, we are pleased to play our part in the economic growth in Consett and the North East.”

Cllr Simon Henig added: “It’s great to see Go North East demonstrating its confidence in our county and our growing economy by making such a significant investment here.

“Public transport is vital to our towns, villages and communities and it is important that we work with our partners to ensure it is reliable and accessible.

“The opening of this new depot is a sign of optimism for the future of services in our area.”

Located on Hownsgill Industrial Estate in Consett, the purpose-built 8,800m² building has been constructed on a brownfield site, formally part of the old Consett Steelworks.

The high-tech operation replaces the company’s Stanley depot, which it operated from for nearly 100 years. The new depot is home to 180 Go North East team members and 63 vehicles.

Other industry-leading features at the new depot include electric vehicle charging stations and vehicle lifts instead of pits on site for engineers, which creates a safer way of working on engines under vehicles.

As part of the development of the Hownsgill site, Go North East has shown its long-term commitment to Consett through its development of its Medomsley Road office for its operations team. Refurbishment here – which cost £100,000 – included new CCTV and alarm systems, a new roof and updating of canteen facilities for bus drivers.

The move to Consett by Go North East is part of its extensive investment programme, which has included £10 million spent on purchasing new vehicles and upgrades to others. Upgrades included environmentally-friendly engines and comfortable and convenient facilities such as audio-visual next stop announcements, USB power sockets, Wi-Fi and leather seating. 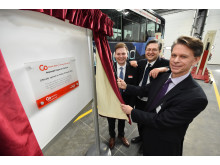 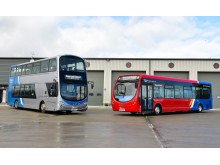