The workforce at Go North East’s Sunderland depot have been supporting the local community with a number of initiatives.

A couple of weeks ago, operations manager Will Sewell set up a GoFundMe page to raise funds to buy toiletries for local hospitals and donations have poured in from across the company and beyond, with colleagues having their hair shaved off as part of the fundraising.

So far, they have managed to raise around £2,500 and working with the local Asda community team they have made the most of their donations, but the community work has not stopped there.

The main ambulance fleet workshop, which is based at Pallion in Sunderland, had some troubles with their wash, so Go North East offered their services at no cost.

Team members at Go North East’s Deptford depot in Sunderland were on hand to ensure its fleet were sparkling clean and ready for service, with ambulances taken through the company’s bus wash and scrubbed down.

Go North East has also donated tea, coffee and other items to fellow key workers at the North East Ambulance Service which operates across Northumberland, Tyne and Wear, County Durham, Darlington and Teesside.

The company additionally responded to an appeal from Abbey Vets in Chester-le-Street and provided newspapers to be shredded and used as bedding.

The company is now looking at ways in which it can support local foodbanks.

“I’m very proud to see these initiatives and our other depots are following suit with some exciting activities now underway.”

If you would like to donate toiletries for the NHS, all you need to do is pack a free-standing bag with items and bring them to a Go North East bus, placing them in the luggage pen inside so they do not need to be handled by drivers. Please only do so when making an essential journey or whilst out on your daily exercise.

Go North East has been wo... 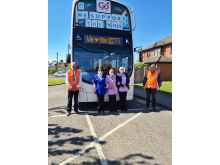 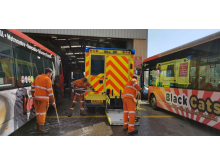 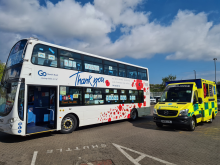 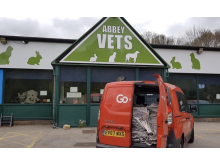