New research from Macmillan Cancer Support has shown that bus commuters walk a distance equivalent to a marathon (26.2 miles) every fortnight by simply riding and walking their regular route to and from work.

According to the charity, one in nine workers spend more than 40 minutes a day walking as part of their commute - including getting to bus stops and the office, using escalators and while changing services.

Stephen King, head of Commercial and Retail at Go North East said: “Many of our passengers probably think the idea of completing a marathon is beyond their capabilities, or even their wildest dreams but the majority won’t realise just how easy it is to clock up the miles by commuting by bus.”

The survey also showed that one in five UK workers (19%) admit their commute is the most active part of their day, with up to eight hours spent seated at work.

And back at home, even more time is clocked up sitting down – up to almost two and a half hours (149 minutes) watching TV and over two hours (127 minutes) while checking personal emails, social media and browsing the internet.

Stephen added: “Getting the bus to work every day means exercise is regular and easy to stick to – much less of a chore and expense than a gym membership.”

Whether you'd like to realise the benefits of walking for exercise, weight loss, or you're training for an actual marathon or sporting event, we have some tips to help you get the most from your ‘Way to Work Workout’. 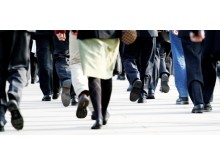