Around 250 people took advantage of a new initiative to combat loneliness this week (Tuesday 29th January 2019) as Go North East’s ten-strong team of ‘chatty champions’ boarded over 30 buses travelling across the region in a bid to get people talking.

Their one-day mission was to encourage passengers to strike up conversation and have a natter with a neighbour, in response to research revealing that three in 10 Brits go at least one day a week without speaking to anyone.

The ‘chatty’ team was on three of Go North East’s most popular services – the Angel 21 which servesDurham to Newcastle, the Castles Express X21 from Bishop Auckland and the X9 and X10 from Newcastle to Middlesbrough - and engaged with people of all ages and walks of life.

Opting whether or not they wanted to chat by picking up a badge when boarding the bus, feedback from passengers was overwhelmingly positive. Chatty champion Pat, who was travelling on the Angel 21, explained: “One lady told us we’d made her day and she wished we were on board all the time. Another, called Lauren, explained she had mental health issues and autism and that we were the only people she had spoken to in over a week. She thought the chatty bus was a fantastic idea that she would love to see happen again.”

One gentleman commented: “I’m going to Gateshead now and I’ve been to town this morning. I get this bus every day. Pat is the first person to ever come and talk to us on the bus.”

The move by the award-winning company, comes after the research, undertaken by ComRes on behalf of Greener Journeys, found that almost two in three people admit to feeling lonely, particularly younger people. The poll of 2,000 people also highlighted that a third of those surveyed deliberately catch the bus to have some human contact while two thirds of bus users believe the bus creates strong community ties.

Martijn Gilbert, managing director of Go North East, concluded: “The feedback from passengers and our champions really highlighted how loneliness has become a common problem in today’s society and we’re so pleased to see how well it has been received across our region. We’ve already had requests asking when our next Chatty Bus Day will be and it’s certainly something we’re looking at for the future.”

More information about the Chatty Bus initiative can be found by visiting gonortheast.co.uk/chatty-bus.

On Thursday 18 April, following the success of Go North East's first Chatty Bus Day back in January, the region's biggest bus company is bringing its second instalment to the people of the North East on some of its busiest routes. 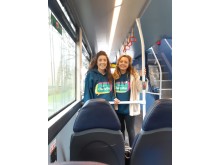 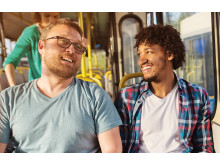