After a challenging year, Go North East colleagues were committed to spreading joy, laughter and festive cheer across the region in the run-up to Christmas.

The video that has been put together celebrates all that colleagues did to make sure that customers and fellow colleagues’ spirits were lifted throughout December.

It all began with Christmas Jumper Day, on 11 December, in support of Save the Children. Following this, drivers and support teams continued to wear their best Christmas jumpers and festive fancy dress right up until Christmas Eve. Santa driving a bus was not an uncommon sight!

Customers also commented on social media about how delightful it was to travel on one of these decorated buses as part of their everyday journeys to work and to the shops.

These activities were swiftly followed up by Go North East’s Christmas Angel and Santa bus tour.

The Christmas Angel operated on the company’s popular Angel 21 route between Durham and Newcastle, featuring festive vinyls and LED lighting on its exterior, with decorations and Christmas songs on the inside.

The pinnacle of Go North East’s Christmas activities was the phenomenal tour of the #GNESantaBus.

Thousands of people stood outside of their homes to see the Santa Bus over the course of its two-week tour. Expertly decorated by volunteers from Parkside Community Centre in Seaham, and carrying a very jolly Santa and his helpers, it gave so many families a chance to see Santa at a time when many indoor grottos and events were closed.

The company’s dancing drivers also returned to spread much-needed cheer with their Christmas video, featuring a drumming dinosaur! Their video received a great response from both customers and colleagues alike.

Colleagues also collected groceries and other items for local foodbanks, which was bolstered by £12,000 in donations from Go North East. This money was raised following the company not being able to take change throughout the pandemic.

Martijn Gilbert, managing director at Go North East, said: “I’m so proud of the teams across our depots who pulled together in the run-up to Christmas to try and put smiles on people’s faces and spread some Christmas cheer.

“Most of the activities were initiated and led by colleagues, who knew that they wanted to lift the spirits of their colleagues and the local communities we serve.

“Given this January is a difficult one, with the introduction of a new national lockdown, it’s important that we remember all the positive things we did less than a month ago and what an amazing team we have at Go North East.

“I hope everyone managed to enjoy what I’m sure was a very different Christmas and New Year, and we look forward to welcoming you back on board soon.” 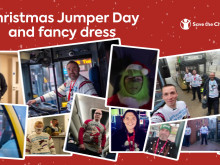