The North East’s largest bus company, Go North East, is showing its support for Sunderland, by branding a bus for the 2021 City of Culture Bid.

Wrapped in bright livery adorning Sunderland’s City of Culture graphics, the bus will help drive awareness and build excitement for the 2021 Bid. The brand-new single-deck vehicle, which has just started its life in Sunderland supporting the bid, is fitted with free on-board Wi-Fi and USB power sockets and is operating throughout the city and across a number of regional routes.

Stephen King head of commercial and retail at Go North East, said: “We are passionate about supporting the communities where our services operate and showing our support for Sunderland 2021 with a dedicated bus was the perfect way to do that. We hope it not only helps share the message about the City bid to local people, but illustrates to those outside of the area how much region-wide backing there is for Sunderland to become the 2021 host city.”

Go North East is one of a number of corporate supporters of the City of Culture Bid. Businesses from across the city and the wider region have pledged their backing in the form of financial donations and in-kind support.

Rebecca Ball, director of Sunderland 2021, said: “It is absolutely fantastic to have the support of the region’s largest bus company who clearly sees the benefits that a successful City of Culture bid would bring to the entire region.

“The bid has reached a critical phase, with our first stage submission now with judges, so the more that we can do to visibly increase Sunderland 2021's presence in the city, and to demonstrate to judges just how much everyone wants this, the better.

“Go North East’s show of support for our bid is wonderful – the bus will effectively become a mobile advert, flying the flag for the bid in the communities this bus serves across the region. We are incredibly grateful for their support."

The City of Culture competition will come to a close at the end of this year, with judges selecting a winner from towns and cities right across the UK. Coventry, Hereford, Paisley, Perth, Portsmouth, St David’s, Stoke, Swansea, Warrington and Wells are all locked in a battle with Sunderland for the coveted title.

City of Culture status can deliver a multi-million-pound boost for the successful city. This year, Hull celebrates being the UK’s City of Culture, and it is estimated that the title will deliver £60 million to Hull’s economy this year alone. The city has already seen a £1 billion boost in investment since winning the title in 2013. 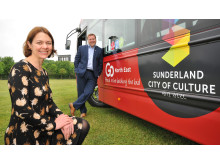