The ‘Oscars’ of the UK bus industry has shortlisted the region’s largest bus operator in four award categories for its innovative marketing campaigns, industry-leading training and engineering excellence.

Learning its fate at the UK Bus Awards 2018 this November, Go North East has been named finalists for the Marketing Initiative of the Year and Sustained Marketing Excellence awards thanks to its hugely popular Big Days Out and £1 fares campaigns.

The shortlists come after the award-winning company demonstrated how it is making the bus a more appealing choice for everyone; including better accessibly for young people thanks to the introduction of hassle-free flat fares. Plus, encouraging families to hope onboard thanks to discounted travel and money-off some of their favourite North East attractions and eateries.

Head of engineering Colin Barnes has also beat off stiff competition to earn a place within the highly-prestigious Engineer of the Year category. With an impressive career history, he has led a wide range of efficiency measures within Go North East’s engineering team including bespoke training and industry firsts. Overseeing the smooth running of its fleet of 650 vehicles, Colin exemplifies Go North East’s commitment to nurturing talent and driving innovation.

Go North East has also been recognised as an industry leader thanks to its Bus Driver Routeway scheme, after being named a finalist for the New Horizons Award.

Commenting on the marketing award shortlists, Mark Yexley, Chairman of the UK Bus Awards, said: “We get to know about some of the most inspiring projects from across the country. These awards celebrate consistency in marketing bus services in an innovative and progressive way. Those that really make a difference and see more and more people jumping on board. It’s a great achievement to reach the final and we wish the team at Go North East the very best of luck at the awards.”

Hosted by BBC News’ Jane Hill, The UK Bus Awards take place on 20th November at The Troxy in London. 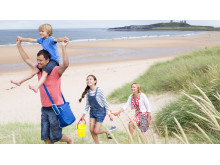 Go North East has been sh...