Go North East has pulled out all the stops to celebrate Sunderland’s most popular local radio station, with the gift of a branded bus at two major events this month (May 2017).

Rolling into Sun FM’s 20th birthday bash at the city’s Keel Square, the state-of-the-art double decker acted as the centre point of the party, which attracted thousands of visitors from across the region earlier this month (7 May 2017).

Coinciding with The Siglion 10k and Half Marathon events - which saw a record turnout of 4,000 people taking part, Sun FM’s milestone festivities delivered an action-packed line-up to entertain the crowds.

Former JLS member, Aston Merrygold performed his new single to fans and up-and-coming stars from the Sunderland music scene showcased their talents. Famous faces from the world of sport were also in attendance. Olympic medalist Steve Cram led a special live Into the Light podcast with SAFC legends Kevin Ball and Michael Proctor, while world record holder Paula Radcliffe graced the stage with Olympian Ali Dixon after the pair went head-to-head in the race.

At the epicentre of the event, the colourful Sun FM bus, manned by local Go North East bus driver, Steve Howe helped to provide information for visitors and a base for anyone separated from their friends and family.

To mark the celebrations, the region’s biggest bus company also held a competition for one partygoer to win a year’s free travel on any bus within the Go North East network.

Driver Steve, who is based at Go North East’s Deptford depot, said: “It was an absolute pleasure to oversee activities from our Sun FM bus. The atmosphere was electric and there was a lot of interest in our competition – congratulations to Kyle Gibson from Houghton-le-Spring as the lucky winner!”

As well as supporting the birthday bash, Go North East’s Sun FM bus journeyed across every town and village surrounding Sunderland as part of Local Radio Day last Friday (26 May 2017).

Steve was behind the wheel once again, transporting Sun FM presenters and station mascot, Sunny the Seagull to multiple locations where they met local listeners and handed out giveaways.

Stephen King, head of commercial and retail at Go North East, said: “Sun FM plays an important part in connecting us with our customers across Wearside, both on air and at local events. We were proud to offer our support at the station’s milestone 20th birthday and as part of Local Radio Day – we always value the opportunity to meet our customers in such fun environments.”

Content director at Sun FM, Simon Grundy, who also presents the city’s favourite breakfast show, added: “Go North East’s Sun FM bus was a great addition to our birthday bash, the bold branding can’t be missed and it ended up as the control centre on the day. The driver, Steve, is a great character and to have him on board again for our Local Radio Day tour was fantastic.”

Go North East’s branded bus is continuing to support the station in a year-long partnership with Sun FM’s Street Stars ground crew. Travelling aboard the bus to some of the biggest events in Wearside’s calendar, the crew is now able to extend its reach further afield throughout the year. 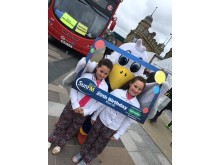