Rugby fans across the North East and beyond can catch a glimpse of the revered Heineken Champions Cup and European Rugby Challenge Cup from this week, thanks to Go North East.

The award-winning bus operator has been named transport partner for the Newcastle Falcons, ahead of the highly anticipated 2019 European Club Rugby Finals being hosted in the city in May.

The vehicle will transport the two trophies, staff, volunteers and the Falcon’s official mascot – Stephen the Seahorse – to events between Friday 22 March and 14 April 2019.

Journeying from Middlesbrough to Newcastle, up to Berwick and the Scottish Borders, the Tour will give fans the opportunity to have photographs taken with the trophies - and be in with a chance to win tickets to the finals.

Mick Hogan, event director for the European Club Rugby Finals, said: “We’d like to thank Go North East for their magnificent support of the Tour. By taking the trophies out across the region they will help us engage with an anticipated 25,000 people and build the excitement for the what promises to be the greatest weekend in rugby.”

As the official transport partner, Go North East will also be carrying officials and sponsors during the finals weekend on 10 and 11 May.

Mark Ellis, Go North East's Business Development Manager, said: “The Tour is an excellent opportunity for Go North East to join rugby fans across the region and beyond, in celebrating a hugely exciting event. Our vision is ‘journeys taken care of’ and we’ll certainly be taking good care of our precious Cup cargo.

“The finals at St James’ Park are expected to be a big draw and Go North East is proud to support the region’s thriving leisure and tourism industry.”

​The European Rugby Challenge Cup and Champions Cup Finals come to St James' Park in Newcastle on 10 and 11 May this year and there's two great matches in prospect. 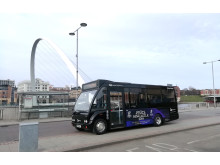 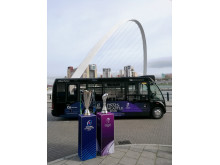 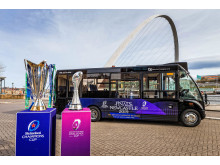