Over the last couple of weeks, Go North East’s team have been getting out and about to wish people a Merry Christmas.

The region’s largest bus company has been spreading some much-needed joy and smiles by touring local villages, towns and cities with its open-top Santa bus.

Whilst maintaining social distancing rules, there were people lining the streets outside their homes each night to wave at Santa and his helpers, and Go North East engaged with thousands of people over the two-week-long tour.

The colleague-driven Santa bus initiative, which has been supported by the donation of lights from Parkside Community Centre, has travelled over 300 miles in total, which is around the same as travelling from Newcastle to London.

With most normal Santa events cancelled this year, the Santa bus has given many children a safe and free way to see Santa, and the reception has been incredible.

There have been so many well-wishers thanking Go North East for their efforts in lifting Christmas spirits and putting smiles back on people’s faces.

One Go North East customer said: “I just want to say a massive thank you for your amazing Santa bus. You’ve brought so much joy to the local kids, and grownups, after such a lousy year. Merry Christmas to you all and thanks for your service over the past difficult months.”

As part of the tour, Go North East has also been giving people the chance to win Love2shop vouchers and goody bags.

Commenting on the success of the Santa bus tour, Martijn Gilbert, managing director at Go North East, said: “I’m truly blown away by the reception that our open-top Santa bus tour and other decorated buses have had.

“It’s been so great to play our part in building up the excitement for the big day and spreading some positivity at a time when there are so many challenges around us.

“The photos and videos that have been shared with us of children, and adults, waving at Santa have been so heart-warming.

“The idea for the Santa bus came from colleagues within our team and many have got involved in decorating or driving the bus, as well as a number of Santas. They have done us, and the communities we serve, proud at this important time of the year.

“From me and everyone else at Go North East, I’d like to wish everyone season’s greetings and the very best for the year ahead.” 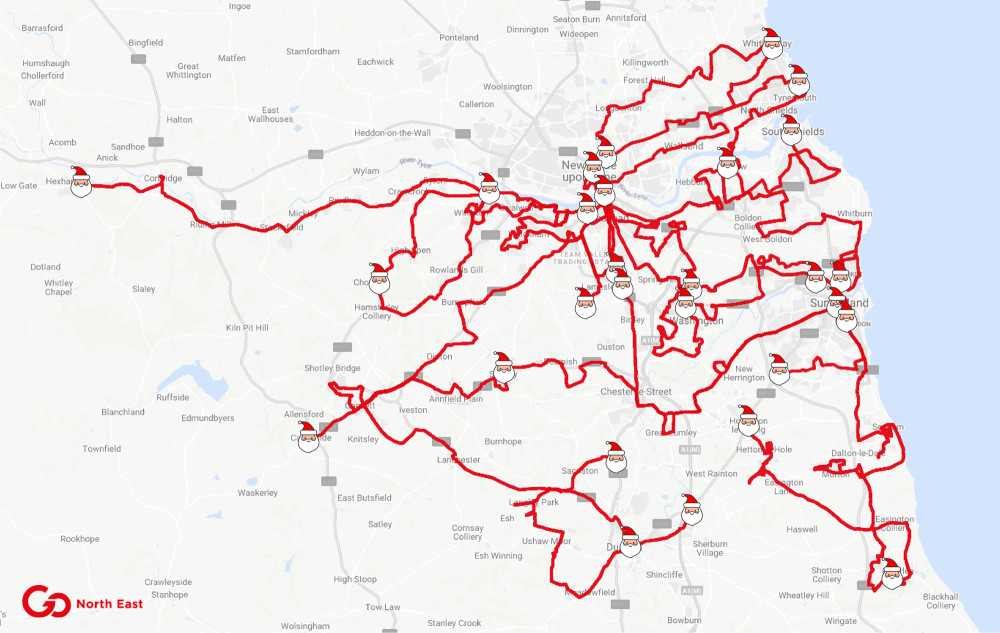