In these uncertain times, team members from across the region’s largest bus company, Go North East, have come together to raise money for charity and other worthy causes.

Go North East is set to break the £10,000 barrier this weekend by wearing football shirts to mark what should have been the end of the season and raise further money, as well as spread some cheer during these challenging times.

Activities so far have included walking and running, with some colleagues showing their commitment to the cause by having their heads shaved or even cream pies thrown in their face, raising over £5,000 for the Great North Air Ambulance Service.

Team members, in another initiative, have now took the walking to another level by completing the one million step challenge with over £750 raised in just a matter of days. All proceeds will be going to The BAY Foodbank, Michael Hall Foundation and Tanfield Railway.

These fundraising efforts add to the company’s recent endeavours to raise money to buy toiletries for the NHS and other causes, with around £2,500 donated so far, and colleagues at the company’s Consett depot raising £1,600 for the Treetops children’s ward at University Hospital of North Durham.

The money raised from drivers and support teams wearing football shirts this weekend will supplement the totals raised for each depot’s chosen charity.

Martijn Gilbert, managing director at Go North East, said: “I’m incredibly proud to see our hardworking team members come together and raise so much money for charity and other worthy causes, especially during such challenging times.

“For our team to be able to keep essential services running is a massive task in itself, but for team members to be so supportive of local causes at this time is truly astonishing – I can’t thank everyone enough.

"We also hope that those who are still travelling with us on essential journeys appreciate the extra bit of cheer and colour to brighten their day.” 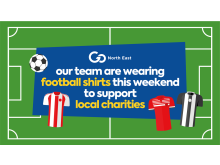 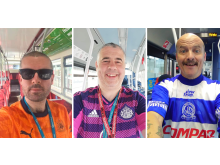