The brightly branded double-decker bus was a focal point for racers of all ages at the event, stationed in the new and improved event village at Newcastle Racecourse at Gosforth Park.

Participants ranging from experienced runners to youngsters and families were invited onboard for face-painting and glitter tattoos, while being entertained by Metro Radio hosts.

Go North East supports The Children’s Cancer Run each year, which celebrated its 35th anniversary in 2017. The event, organised by NECCR helps to fund research into childhood cancer that has established the region as one of the world leaders in this specialist area.

Among the 20,000-people taking part and fundraising for the charity was Go North East Depot Manager, Sophie Moorby, who is training for the upcoming Great North Run and was joined by her mum and her friend, Candice. She said: “It was an excellent day and fun for all the family – our Metro Radio roadshow bus was absolutely packed, and all for a fantastic cause.”

With the help of this year’s fundraising, the total raised throughout the event’s history has now exceeded seven million pounds.

Regional Head of Sales at Metro Radio, Mark Clancy said: “We’re delighted that the fundraising total has reached another milestone, and everyone really enjoyed themselves in the process – our bright and lively broadcast base couldn’t be missed thanks to Go North East and the entertainment on offer definitely added extra sparkle to the runners’ day!”

Stephen King, Head of Commercial & Retail at Go North East said: “The Children’s Cancer Run is part of a series of events that Go North East supports Metro Radio with, and one we look forward to every year. There are so many people in our region affected by this disease and playing just a small part in helping more children to beat cancer is something we are honored to be involved in.” 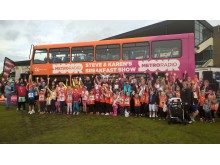