Families in the North East can choose a seat in Cinderella’s carriage and enjoy a charmed journey of their own, thanks to the fairy-tale transformation of a Go North East bus to celebrate Newcastle Theatre Royal’s record-breaking pantomime.

Cinderella plays until Sun 15 Jan ’17, and to mark the run of the most magical pantomime of them all, the region’s largest bus operator has, for the first-time ever, given one of its buses a magical makeover.

Each side of the single-deck Mercedes-Benz Citaro has been transformed into Cinderella’s glittering carriage and includes images of seasonal favourites Danny Adams as Buttons, Clive Webb as Baron Hardup and Chris Hayward who, as the Fairy Godmother, is celebrating a decade of panto appearances in the city.

Passengers joining the bus, which will be operating on a number of routes around Tyne and Wear, can choose a seat in the carriage – making for a magical journey, even if they can’t make the panto.

Stephen King, Head of Marketing and Retail at Go North East, said: “Our customers and staff know how much pride we take in branding our bright and standout buses, so when the opportunity arose to transform one of our fleet into a carriage, we were keen to get involved.

“Working with the Theatre Royal and the cast members from the show, has been a real pleasure and we look forward to getting feedback from our passengers on their regal journeys.”

Cinderella sees Danny and Clive – the hilarious father and son double act – return to the Theatre Royal for their twelfth successive panto year and they, along with slapstick comedy routines, amazing special effects, dazzling choreography and stunning musical numbers, have helped make the Theatre Royal’s festive production one of the fastest selling in the country.

Philip Bernays, Chief Executive at the Theatre Royal said: “It is wonderful to see Cinderella’s stunning carriage travelling around the North East giving everyone the chance to be part of their own fairytale journey. We are sure passengers will enjoy pretending to be their favourite characters and people will be thrilled to see Danny, Clive and Chris as they travel their way throughout the region.”

Cinderella plays at Newcastle Theatre Royal until Sun 15 Jan 2017. Tickets are available from £13.00 and can be purchased from the Theatre Royal Box Office on 08448 11 21 21 (calls cost 7ppm plus your phone company’s access charge) or book online at www.theatreroyal.co.uk. 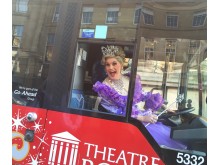 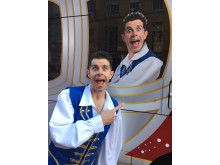 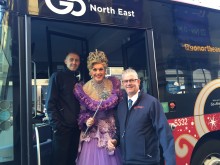