A devoted driver and dad of one from the region’s largest bus company, Go North East, will soon be tackling his seventh Great North Run; in support of the Newcastle-based premature and newborn baby charity, Tiny Lives.

Kevin Brown, from North Shields, has dedicated the past seven years to raising money for the organisation, which supports premature and sick newborn babies and their families on the Neonatal Unit at Newcastle’s RVI Hospital. Over this time, he has fundraised and donated £22,300 to the charity – and is aiming to raise a further £2,700 by the end of the year.

The 34-year-old will be joining over 57,000 runners in the UK’s biggest half marathon on Sunday 9 September, journeying 13.1-miles from Newcastle city centre to the South Shields coast.

Once again, Go North East will be supporting the iconic event, which began in 1981; by providing a dedicated baggage delivery and passenger transport services.

Based from Go North East’s Percy Main depot, Kevin, who is married to Emma and has a seven-year-old daughter, Leah, said: “I completed my first Great North Run seven years ago with a friend, who knew a couple who had tragically lost one of their newborn twins at birth. The charity really helped the parents, and their story stuck in my heart. It started as a group fundraising effort and I decided to keep going. I have run across the UK and America and held a variety of fundraising events.

“I love knowing that I’m helping the charity, and everyone associated with them. It makes it all worthwhile. I’ve also taken my daughter to visit the unit at the hospital – she was blown away with all of their specialist equipment and seeing the small newborn babies.”

Kevin is one of a group of determined Go North East team members, who will be donning their trainers for the looming half marathon. This includes customer services advisor Neil Jones, who will be running on behalf of Tommy’s Charity, which investigates the reasons behind still births and miscarriages. Neil, who hopes to raise £300, explained: “This is my first Great North Run and I have never attempted it before because I’m a sprinter, rather than a long-distance runner. The change in discipline is hard to master but I am determined to do this to honour the memory of my baby.”

Finance director Paul Edwards will be marking his third time contending, hoping to raise over £250 for cancer charity, Macmillan, and it will be the 12th time round for development manager Mark Ellis, aiming to raise £250 for the British Lung Foundation. 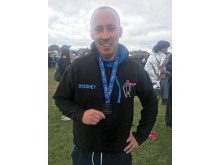 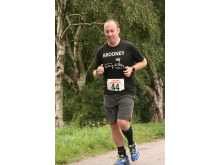