A bus station supervisor from the region’s largest bus company, Go North East, celebrated his 30th year working at this month’s Great North Run; offering essential guidance and direction to spectators, and driving the runners home after their victories.

Paddy Fagan has become a well-known face at the iconic half marathon, always ensuring the operation runs like clockwork and as smoothly as possible for competitors, supporters and fellow team members.

The 68-year-old from Jarrow, will be celebrating his 45th year working at Go North East in January, and is based at the Riverside depot. He says: “I’ve been involved with the Great North Run since day one, and only ever missed one year. It’s always a great atmosphere and I see the same faces taking part every year. I really enjoy being there.”

Go North East has provided baggage and transport services for the event since it began in 1981, and this year was no different; with a dedicated events team of 93 drivers, three engineers and 25 supervisors on-hand across the day.

Team members even received the chance to rub shoulders with this year’s competing VIP stars, including comedian Ross Noble and singer Olly Murs, who hopped on-board the bus after completing the gruelling 13.1miles run.

Commercial director at Go North East, Stephen King commented: “The Great North Run brings thousands of people to our region and we are proud to have supported the iconic event for the past 37 years. A big thank you to all our team members who work effortlessly to help make the event such a huge event and a special well done to Paddy, who celebrated his 30th run on Sunday 9 September!” 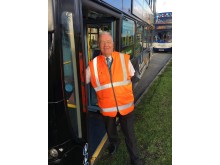