Over 15,000 visitors hopped on-board the bus to battle the wind and rain for a weekend of sky displays at the Sunderland Airshow; with Go North East on-hand to guide passengers to the festivities.

Travellers to the Airshow were able to park up and hop on-board a bus from either Downhill Sports Complex, Fulwell Quarry, the Stadium of Light or Deptford Terrace with buses running every few minutes to Recreation Park at Seaburn. There were also extra buses running on the A1 Express journey from the Park Lane Interchange to the Airshow, and the A2 Express from Washington.

In total, 15,632 passengers chose to take the bus to catch a glimpse of the aerial action, with over a fifth taking advantage of Go North East’s new contactless on-board ticket machines. This follows a £1.6 million cash injection by the bus operator to make paying for a ticket as fast and easy as possible for travellers.

The Sunderland Airshow was held from Friday 27th to Sunday 29th July across the city’s seafront. This year’s event celebrated its 30th anniversary and included colourful displays from the Red Arrows, the Typhoons and Spitfires.

Stephen King, commercial director at Go North East said: “The Airshow is always a huge event in Sunderland and it was our pleasure to provide four dedicated park and ride routes and two additional services to make travelling to the festival as easy as possible. Huge crowds turned out and thanks to the support and dedication of our drivers and team members, guests were able to catch sight of the spectacular displays.” 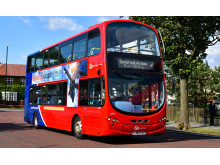