The region’s biggest bus company, Go North East has been named in the prestigious Centrica Top 100 Apprenticeship Employer list for its unique bus and coach engineering apprenticeship, developed in partnership with Gateshead College.

Around 90% of Go North East’s engineering workforce started their careers as apprentices. The 256-strong team currently has 31 apprentices studying at varying levels of the four-year programme, which includes bespoke training using state-of-the-art equipment at Gateshead College’s £5.5million Skills Academy for Automotive, Engineering, Manufacturing and Logistics based at Team Valley in Gateshead.

The popular scheme attracts over 500 applicants for the average intake of up to 10 new apprentices, each year and is widely renowned in the region and across the industry.

In 2017, the programme received national acclaim at the Recruiter Awards for Best Apprentice/School Leaver Recruitment Strategy and won the top honour in the Operator Training category at the routeone Bus and Coach Transport Awards.

Go North East was also Highly Commended at the regional National Apprenticeship Awards as Large Employer of the Year, leading to its coveted place as one of nine North East businesses on The Top 100 Apprenticeship Employer list 2017.

Managing Director at Go North East, Kevin Carr said: “This is the first time Go North East has appeared on the Top 100 Apprenticeship Employers list and we are honoured to be recognised alongside well-established regional brands such as Hays Travel and Northumberland Tyne and Wear NHS Foundation Trust.

“Our award-winning engineering apprenticeship was created to combat the skills gap in the bus and coach industry, and our region, and continues to go from strength-to-strength; giving young people the opportunity to succeed while acting as a valuable recruitment tool.”

Director of Business Development at Gateshead College, Ivan Jepson, added: “By working closely together, we’ve been able to understand Go North East’s business objectives and workforce challenges to design a tailored training programme that perfectly meets their needs and builds the skills their industry needs, both now and in the future. It’s great that they’ve been recognised on a national level for the commitment and energy they dedicate to apprenticeship training and the fantastic employment opportunities they’re providing to the region’s young people.”

Sue Husband, Director of the National Apprenticeship Service said: “These Top 100 Apprenticeship Employers are making a difference to the lives of their apprentices by investing in their future. In return, apprentices are helping employers to develop a skilled, qualified workforce to build a stronger economy.”

This National Apprenticeship Week (5-9 March 2018), the region’s biggest bus company, Go North East is calling out to aspiring young engineers with a thirst for knowledge and the drive to develop hands-on skills to apply for seven coveted spaces on its award-winning apprenticeship scheme. 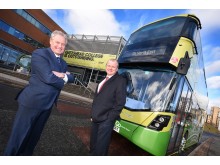