Go North East’s commitment to making bus travel more appealing to families and tourists has been recognised at Monday’s (23rd April) VisitEngland Awards for Excellence 2018, after the region’s largest bus operator claimed the silver award for Innovation in Tourism.

Shortlisted against high-profile organisations including British Airways and the English Lake District China Forum, Go North East was commended for its Big Days Out campaign, at the afternoon ceremony held in the Bath Assembly Rooms.

The multi-faceted marketing campaign, which forged partnerships with regional tourist attractions including Ocean Beach Pleasure Park and MFA Bowl and utilised support from Go North East’s marketing partners including Beacon Creative, The Tonic Communications and via its parent company Go Ahead Plc, launched during the 2017 summer school holidays.

Using research into the motivators which encourage people to use the bus over other forms of transport, Big Days Out targeted families who aren’t typical bus users, with a reduced family day ticket price, down to £10 and, discounted rates and money off popular local attractions. As a result, Go North East saw a 69% year-on-year increase in family day ticket sales.

Stephen King, commercial director at Go North East who spearheaded the campaign, commented: “We are overjoyed to have been awarded silver at the prestigious VisitEngland Awards. We are extremely proud of our Big Days Out campaign which has proven particularly successful for us and our regional partners – so much so that we have extended the campaign into 2018.”

Sally Balcombe, CEO of VisitBritain and VisitEngland said: “The standard of the hundreds of applications we received this year was extremely high and that’s why Go North East’s accolade is a testament to their excellent work.

“These awards shine a spotlight on our fantastic tourism industry, with the winners showcasing the quality, innovation and excellence on offer throughout England and I warmly congratulate them on their impressive contribution to the tourism industry.” 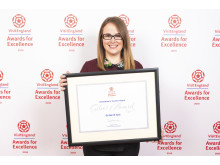