Three North East charities were told “you shall go to the ball” when Go North East and Newcastle Theatre Royal gave them VIP access to see the spectacular Cinderella panto before anyone else.

Go North East, which transformed ofone of its buses into a fairytale carriage to celebrate the show and its partnership with the Theatre Royal, was delighted to be able to offer 46 panto tickets to people who have had a tough year and have given up their time to support their communities.

Lots of festive fun was enjoyed at the Dress Rehearsal preview performance, which took place on 21 November.

Chester-le-Street based If U Care Share Foundation provides emotional and practical support for people and families affected by suicide.

Operations manager at the charity, Sandra Emery said: “We are very grateful to Go North East and the Theatre Royal for thinking of the people we support as Christmas is always a difficult time for those that have lost a loved one.

“Being able to enjoy quality time together at this time of year is incredibly important to bring families together, and particularly for the little ones. The show was spectacular and it was wonderful to hear how much our families enjoyed the sneak preview.”

The famous pantomime sees the return of multi award-winning panto legends Danny Adams (Buttons) and Clive Webb (Baron Hardup) with more of their hilarious comedy antics. The duo is joined by Chris Hayward (The Fairy Godmother), who has returned for his tenth season with his kaleidoscopic wardrobe.

Stephen King, Head of Marketing and Retail at Go North East, said: “The Theatre Royal pantomime is renowned as one of the best in the country with all the glitter and glamour Newcastle theatregoers have come to expect. We were delighted to be able to spread a little Christmas cheer to those that might not usually get the chance to experience the North East’s premiere event.

“Go North East is proud to work with charitable organisations and major productions across our region, and by bringing just a little bit of magic to the lives of those we support is a gift in itself.”

Cinderella plays at Theatre Royal until Sunday 15 January 2017. Tickets are still available and can be purchased from the Theatre Royal Box Office on 08448 11 21 21 or booked online at www.theatreroyal.co.uk. 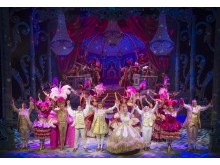 Cinderella at the Theatre Royal, Newcastle