On Thursday 18 April, following the success of Go North East's first Chatty Bus Day back in January, the region's biggest bus company is bringing its second instalment to the people of the North East on some of its busiest routes.

The Chatty Bus initiative is in response to the Government's loneliness strategy, with research undertaken by ComRes on behalf of Greener Journeys showing that three in 10 Britons go at least one-day-a-week without speaking to anyone close to them.

The poll of 2,000 people also highlighted that a third of those surveyed deliberately catch the bus to have some human contact while two thirds of bus users believe the bus creates strong community ties.

From 9.30am-3pm on Thursday 18 April, Chatty Bus Champions will be boarding a number of journeys on three of Go North East’s most popular services, including:

Martijn Gilbert, managing director of Go North East, said: "Loneliness is a major problem in today's society, so we were pleased to see how well received our first Chatty Bus Day was.

"This Thursday our second instalment will coincide with 'Getting to Know Your Customers Day', and we're looking forward to welcoming you all on board for a good old natter, with the overall aim of making people happier."

More information about the Chatty Bus initiative can be found by visiting gonortheast.co.uk/chatty-bus. 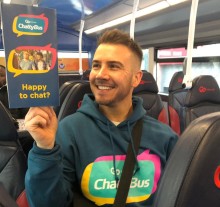 Around 250 people took advantage of a new initiative to combat loneliness this week (Tuesday 29th January 2019) as Go North East’s ten-strong team of ‘chatty champions’ boarded over 30 buses travelling across the region in a bid to get people talking.

Amid research highlighting three in 10 Brits go at least one day a week without speaking to anyone and in a bid to support North Easterners who maybe battling with loneliness, Go North East is introducing ‘Chatty Bus Champions’ to three of its busiest routes on Tuesday 29th January.